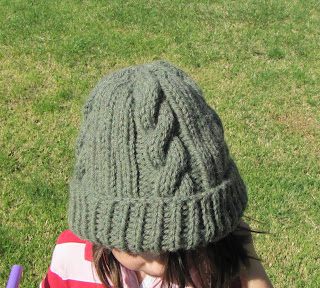 
This hat is knitted in 3.5 stitches per inch guage and measures about 20.5 inches around to fit an average-sized woman, so adjust your measurements accordingly. Using your circular needles and a long-tail cast-on, CO 72 stitches and join to knit in the round.
*K1, P1 * Repeat to end of first round and PM.
Continue in K1, P1 ribbing until your piece measures four inches long.
Round 1: P2, K6 (for cable), P2, K2, P1, K2, P1, K2, PM
Repeat this pattern three more times, placing a second marker at the beginning of your second round, so you know where the next round begins.
Round 2: Same as Round 1.
Round 3: P2, SL 3 sts onto the cable needle and place it behind your work. K the next 3 sts, then K the 3 sts from the cable needle back onto your circular needle. P2, K2, P1, K2, P1, K2, SM. Repeat this pattern three more times to complete Round 3.
Repeat Round 1 for 5 rounds, repeating round 3 on the next round.
Continue this pattern until your hat measures 8”.
To begin decreasing, P2, K2, K2TOG, K2, P2, K2TOG, P1, K2TOG, P1, K2TOG, SM.
Continue the pattern 3 more times for the rest of this round.
Onto a DPN, P2, K5, P2, K1, P1, K1, P1, K1.
Continue in the pattern to the end of round so you have 14 sts each on 4 DPNs.
Next Round: P2TOG, K2TOG, K1, K2TOG, P2TOG, K1, P1, K1, P1, K1. Repeat this pattern 3 more times until you have 10 sts on each needle.
P1, K3, P1, K1, P1, K1, P1, K1, repeating this pattern for the rest of the round.
K2TOG for the entire round, leaving a total of 5 sts on each of the 4 DPNs.
K2TOG for another round, slipping the last st on Needles 1 and 3 to the next needle and leaving a total of ten stitches. Cut the yarn, leaving 6-8 inches of yarn and thread it through a yarn needle. Slip the sts off the DPNs and onto the yarn needle, running the yarn needle through the last ten sts and pulling it tight. Weave in all the ends and fold up the brim.

This is adorable! The cables really pop with that yarn.

I would love to make this hat for a child with a worsted weight. Do you think it would work with the same sized needles? You can surmise that I am a neophyte knitter. Thanks for any feedback.

Patrice, I knitted this hat up in worsted weight cotton yarn on size 7 needles and it ended up being a baby hat. You sort of have to eyeball it to see how long you want to knit it in a different size, but it toally works!

How long have you been knitting? This is a really easy pattern for a beginner. Let me know if you knit one...I would love to see a picture of it!

I really like this pattern. It is so easy in the round. I have made ten of these hats so far. I did change the ribbing to knit2, purl2. It seems to fit better and not stretch out.

I really like this pattern. It is so easy in the round. I have made ten of these hats so far. I did change the ribbing to knit2, purl2. It seems to fit better and not stretch out.

In this pattern I don't know what the abbreviation 'PM' stands for. I'm sure it's somthing obvious but did not see a reference.

'PM' stands for 'Place Marker.' I didn't even realize that it wasn't actually spelled out! I'm one of those knitters who feels like I'm missing some huge piece of the puzzle if I'm sure of a term, too. I guess I should really fix that! Thanks for visiting my pattern and let me know if you knit one!

On the heels of the PM comment - does "SM" mean slip marker? I really dislike the abbreviations in knitting!! Also, can you be more descriptive as to how to change the pattern for worsted weight yarn to make this for an adult? Thanks! April

Just found this pattern and wonder....how many stitches would you add for an knitting for a M Man's hat or would you go up in needle size?

Thanks. Making for brother-in-law going through chemo.

I used a fairly bulky weight yarn on a size 10 needle, and this hat ended up being large enough for my father-in-law, who's a really big guy. Very simple and nice-looking pattern. Thanks for sharing!

In using a circular needle how do you join in order to knit in the round?

I really like the hat! I don't have a cable needle though, is it possible to make it without one?

hi, is it 8 inches including ribbing or 8 inches from the end of the ribbing? thanks kandy

No cable needles? Just use a DPN.

Love this pattern. Made 5 in a couple of weeks. Used Deborah Orville sequin bulky yarn. The 10 needles large, but ok. I am using a 9 now. Think will be a better, snug fit.

The hat is adorable. Would you write the pattern using straight needles.

I don't have full use of my hands and really struggle with round needles in the decrease portion.

If you would do that, I would really appreciate it. I have been knitting all summer for the homeless women at Room In The Inn. I love this hat and I think theses women would love them too.

Thank you so much,
Rusty

I see this Is an old posting if anyone is still here can I make this to fit a large head man 22 inches
Maizee123@yahoo.com

I see this Is an old posting if anyone is still here can I make this to fit a large head man 22 inches
Maizee123@yahoo.com

When you have the dark background, when the pattern is printed it comes out to light, but ads on the sides come in perfect.!!
Very discouraging. Your pattern for the cable hat looks good. Wish I could print it better. Thank you for the pattern.

After Round 1 the directions state "Round 2: Same as Round 1." Does this include repeating Round 1 three times?R

Can i make this on straight knitting neddle

You would need to use two strands of worsted weight yarn.

how do you print this off?