Because Every 2nd Grader Needs Falsies... 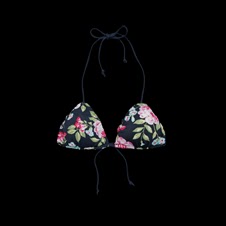 Whether we actually feel we have them or not, breasts are a big part of a girl's life.
I was reminded of this very thing today when David flipped on the television and people were outraged by the new bathing suits that Abercrombie and Fitch are currently hocking.  In case you live under a rock and haven't heard all the commotion, they are selling a variety of bikini tops that seem to have the boobs already built-in.  They cleverly call them 'Lightly Padded' and are targeted to girls between the ages of 7 and 14.  Supposedly, they initially referred to them as 'Push-Up' but have taken that particular description off their site.

*snicker*
Upon hearing about this, I couldn't help but think about what my own reaction might have been when I was a kid.  I couldn't WAIT to get my own set of knockers from as far back as I can remember.  My mom loves to tell people the story about when I was about three or four years old and she walked into the bathroom to find me crying in the bathtub.  Upon asking me why I was crying, I answered her, "Because I don't have any boobs to wash!"
I think I cried those same tears all through high school...
*sniff*
I don't think my mom would have bought me a padded bikini top.  In fact, I know she wouldn't have.  Aside from the whole 'sexualizing young girls' argument, my mother just didn't buy many things that weren't practical.  I'm not sure how she would have felt about it morally, but she certainly got her share of laughs when I would take the plastic eggs that her L'eggs panty hose came in, pop them under my shirt and strut around to show off my new 'rack.'  That being said, a bikini with built-in boobs?  I would have totally wanted one!

I'm really not sure why I was so focused on the whole idea of having boobs as a kid.  It became even more of an issue when I was one of the last of my friends to get them.  I would have never stuffed my bra, though.  I saw too many things on television where girls tried to get away with that, drawing even more attention to themselves and eventually getting 'outed' and being ridiculed.  Being exposed as 'fake' seemed even more humiliating than having a flat chest and having the whole world know it.  Besides, I could just wear baggy shirts and slouch a lot to keep them guessing.  (In my head at the time, that made perfect sense.)

If I really stop and think about it, I wasn't visited by the 'Boob Fairy' until I became pregnant for the first time.  Unfortunately, she didn't arrive until she could bring along her sisters...the 'Thigh Fairy,' the 'Ass Fairy,' and the 'Stretch Mark Fairy.'

For me, they seem to be a package deal.

I've been truly blessed by the fact that my 'girls' have served me well.  They have fed three babies and filled-out their share of cute tops.  I look around and see so many people who have been affected by breast cancer and lost theirs and I think of a friend from long ago.  She passed away years ago, but she had already conquered colon cancer and lung cancer by the time I'd met her.  She broke it down plain and simple one day:  I know a lot of women are completely devastated when they lose a breast.  After losing my colon, all I can say is, "Take my breasts.  Let me keep my colon!  The colon is a much more inconvenient thing to lose, trust me."

That really put things into perspective for me.  I also remember her for her phrase she used a lot when she was feeling the effects of her chemo and someone asked her how she was.
"I've been worse!  It can always be worse, you know."

However you look at it,  breasts are a big deal for most girls.  (Okay, boys too!)  I don't see anything wrong with a little girl wanting to play 'dress up' and wanting fake knockers.  Most of the time, it's on the same level as wanting to walk around in high heels or wear lip gloss.  Little girls usually grow up wanting to be like their mommies.  And that's usually okay.  Usually.

But little girls wearing falsies as a part of their regular wardrobe?  Totally not the same thing.  It will be really interesting to see how this whole thing plays out.  I'm curious to see which of my daughters' friends (if any) will own one.  Just like it is with everything else, there will always be parents on the sidelines, waiting to judge the one who breaks down and buys the controversial 'thing' that everyone is talking about at the moment.


In the end, I don't think any of the girls who get these particular bathing suits are going to be scarred for life or anything like that.  This is just one more thing to blur the lines a little bit more between fantasy and reality.  I know I won't be buying them for my daughters.  My 8YO could care less...she has no interest in makeup or anything like that.  She enjoys just being a kid.  My 5YO....she would totally want a 'padded top!'  (Gee...I wonder where she gets that from?)

But, instead of making such a fuss that something like this actually exists, I embrace the opportunity to say 'NO' and stand my ground.  This world is full of things that we don't agree with.  We can't change everything around us to suit our own needs or wants, so we need to arm our children with confidence and common sense.  I am raising my daughters in hopes that someday they will make smart choices on their own in this world, not the protective bubble most of us instictively want to keep them in.  Those bubbles can't last forever, and why should we want them to?  To quote a brilliant character from a profound animated movie about being an overprotective parent: "Well, you can't never let anything happen to him.  Then nothing would ever happen to him.  Not much fun for little Harpo."

Thanks, Dory.  I couldn't have said it better myself!

So in my humble opinion, I don't think these 'lightly padded' bikini tops are hurting anyone.  Yes, they are tacky.  No, I won't be buying one for any of my daughters.  (And if someone else buys them one, they still won't be allowed to wear it.)  But a bathing suit alone should not be able to actually affect who a child is as a person.  Aren't we trying to teach them to see beyond that anyhow?

However, this is a nice change of scenery from all the Charlie Sheen chatter...

Sometimes, I think my life could be a sitcom.