Random Thoughts and 'Chicken and Biscuits'

Since my brain has officially become dormant from spending so much with no real schedule to speak of, some random bulleted thoughts are all I can muster.

Spewed forth by Leann I Am at 8:34 AM 2 comments: Links to this post

Do you have some kids that live in your neighborhood that just leave a bad taste in your mouth?
We have these two neighbor kids that are the sort of obnoxious that you only usually see in sitcoms. Seriously. They whine, they pout, they are bossy and just plain mean. Somedays, they seem to wander the streets looking for someone to play with. I used to dread them coming by, but they were nice enough to my kids and I could keep an eye on them all while they were here.
Now, my own kids don't want to play with them anymore!
They were so bad the last time they came over that my 7YO actually FAKED AN INJURY to be able to come inside and escape them. She whipped up fake tears and everything to be able to come inside and lie down for some 'quiet time.'
I'm not really excited about the fact that she was able to do this, especially since I know she'll probably use it against ME at some point, but you have to give her credit for ingenuity!
This is fresh on my mind because they just knocked on the door. Yes, we are all home. Yes, we have nowhere we have to be anytime soon. Yes, we hid like it was some twisted game of hide-and-seek. Answering the door and explaining that the kids cannot play will produce the most horrific session of whining and crying. We've had this conversation time and time again. Usually though, we are actually getting ready to go somewhere and I can truthfully tell them that the girls can't play. But, I'm not that good of a liar and I'm afraid that the next time I answer the door it will be to tell them that my girls do not want to play with them.
I can't do that! After all, they're still just CHILDREN! It's not their fault that they're so unpleasant to be around! Is it? I can't fix them and I certainly can't fix their parents.
So, here we sit....blinds closed and doors locked on this hot summer day...praying that they don't come back. They gave up after ten minutes of knocking and trying to peer through the windows. I feel so bad about ignoring them, but I think I would feel so much worse if I answered that door. I'm a big chicken, I know.
What would you do? Do you have a situation like mine and how do you deal with it?
Spewed forth by Leann I Am at 12:35 PM 7 comments: Links to this post

Me and My Dogs 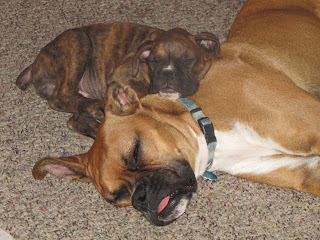 It seems that so many things seem to make sense...then a realization hits you one day and you realize that you never really understood this thing that you thought you did.

Acquiring this new boxer puppy has opened up my eyes in so many ways. First of all, I am never more thankful for having old carpet than when we have a puppy or small child in the process of 'potty training.' Accidents happen, and it's a lot easier to keep my cool when I know this carpet has been peed on before. I just keep a spray bottle of carpet cleaner handy and plan to steam clean them more often. Thank goodness for these warm summer days! I just hope he has the hang of this thing before the weather gets cool and carpets don't dry as quickly. We are crate training him, but puppies live even more 'in the moment' than adult dogs do.

Let's just say the word 'spontaneous' would be an understatement.

I was browsing through an old magazine about boxers the other day. It's nice to do that when starting to deal with a new puppy because I sometimes do need reminders that boxers are NOT like most dog breeds. It really helps me keep my patience and laugh more because they are more like clowns than dogs. (Well, except for the scary makeup! *shudders*) I know I'd read this particular article before, but I didn't take the same message away from it that I did this time. They were talking about how it can be really hard to get a boxer to focus on a task because they are bred for multiple purposes. They are bred for guarding, herding, and hunting. All three instincts can seem to counteract each other with one seemingly simple task at hand. It's almost as if their head is just too many places at once to finish the job.

That's what wrong with most PEOPLE, I think! We are all driven to do so many different things that we often drop one ball to pick up another. Sure, modern conveniences make being a stay-at-home-mom easier than ever before in so many ways, but at what cost? A few decades ago, a mom would finish the breakfast dishes and then start making lunch. In our house, the breakfast dishes are what I might make time for (or get my 14YO to do...gotta love that age!) in order to start cooking dinner. (But if they're not in my way, probably not!) Lunch is usually just one long grazing session that starts a couple of hours after breakfast and ends (HOPEFULLY) a couple of hours before dinner. I've even thought about investing in a pressure cooker for the sole purpose of being able to start cooking dinner even later. (And we already eat dinner later than anyone else I know!) Don't get me wrong, because I still love my slow cooker...but more often than not my plans to throw something in for dinner get foiled by my own procrastination.
I need to put the chicken in the slow cooker right now in order for it to be ready for dinner, but I will probably forget now and remember when it's too late to do it this way and be forced to scramble when we're already hungry and it's already late and....
I guess you could say that I have more in common with my dogs than I'd ever realized. That would explain a lot, wouldn't it?
Spewed forth by Leann I Am at 11:27 AM 3 comments: Links to this post