Three Whiney Girls, Too Much Laundry, a-and Now We-e Have No Wa-ter! 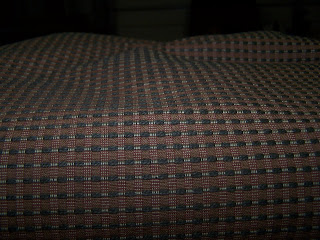 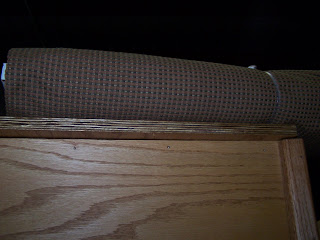 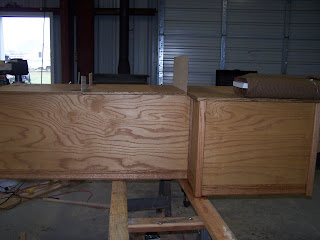 Now, that's one version of 'Tweleve Days of Christmas' that I sure haven't heard!
The above pictures are of my new storage bench to keep inside my back door. David built it on Saturday. I bought the upholstery to go over the top of it, along with some padding foam stuff to give it a little 'cush.' It was on sale for $2.00 a yard, so I stocked up! This thing is six feet long across the back, three feet along the right side, and 21 inches deep. David bought this oak veneer stuff to match most of what we have. It needs another coat of something, from what he tells me. Then, I can attempt to put a cushion on the top!
I know I married a cheap man, but at least he has some skillz to still get things done....when he wants to, that is!
12YO is home sick today. She didn't feel well last night and kept calling me while I was out shopping to keep me posted. Isn't she sweet? David was here, but she had to tell ME. Many times. She still felt yucky today, so I let her stay home. 5YO tried to stay home too. I'm not sure if it was some sort of sick chain reaction or what, but I didn't quite buy it. I let her stay home, but told her she had to stay in bed and do nothing in order to 'rest.' She came out to eat breakfast and went straight back to bed. I told her that if she was well enough to play, she was well enough to go to school.
I was signing her into the office at her school by 10:10.
Well, all this talk of sickness also has 2YO claming she has all sorts of symptoms. Funny, her symptoms seem to be cured by a new episode of Max and Ruby. And a peanut butter sandwich, go figure! 12YO is a little better at this, and knows to stay in her room if she doesn't feel well. I'm not letting her read, though. She enjoys it too much. She might really feel yucky, but she's already wandered over to her desk and started to study, so she can't feel that bad!
I tell ya, all this talk about them having 'headaches' is starting to give me one!
Just after David left, I noticed that we didn't have any water. I went out to the well and pushed the normal 'reset' buttons. That didn't do anything, so I flipped one of the breaker switches and the pump that pushes the water into the house started running. Since our holding tank is full, at least we know that our well isn't dry! But, the pump that sends the water into the house seems to not want to cooperate. It runs for a few seconds, but the pressure into the house is only getting to be about 1/3 of what it should be. That's enough water to flush the toilet a few times and wash our hands, but that's about it!
Ahhh...the price we pay for having a bigger yard and being able to see the stars at night....
I've decided to get the flour and sugar out of my diet again. I've fallen off the 'carb wagon' and the downward spiral that has since ensued isn't pretty. I've gained about ten pounds and I feel like crap. Plus, the migraine I had last week was a real wake-up call. I've since been to a baby shower and a birthday party and have managed to pass on the cake at both. That's a start!
December is a tough month when it comes to time and money. I know most people feel that way. For us, however, it's brutal.
Here's a little rundown for ya:
12-6.....baby shower
12-7...birthday party
12-13....birthday party
12-17....birthday party
12-19...last day of school for the Christmas break and 5YO's class party WITH a gift exchange
12-22...David's birthday
12-25...CHRISTMAS
12-28....2YO's birthday
12-29....MIL's birthday
12-30...my brother's birthday
12-31...my cousin's daughter's birthday
Factor in that David is at his busiest time of year at work and won't be getting home until almost 10:00 every weeknight, and I'll be lucky to have hair come January. Plus, 5YO has a birthday January 11th and this is her first birthday party she'll have when she can invite actual friends from her class. It's a big deal to her, which puts a little more pressure on us.
My head is spinning just from reading all that.
Well, 12YO is paranoid that she won't get credit for something she's missing today and she needs to email a couple of teachers. I try to tell her that she's not in college yet and won't be held quite so accountable for missing a day, but she IS 12. Her job is to not believe me and I can't take it personally. Plus, at least she's taking some initiative!
I need to make myself some eggs and wait for our 'well guy' to come and check things out. It's funny how, now that I don't have much water to use, all I can think about doing around here are things that take WATER.
Deep down, I'm still a spoiled child who hates to be told 'NO.'

That is A LOT of parties. Make sure you take it easy and don't stress b/c migraines don't care if you already have plans for the day.
p.s. I tagged you over on my blog!